Concerts in April, May, July and September and the visit to Rochester Cathedral in October were cancelled because of Covid 19 restrictions. 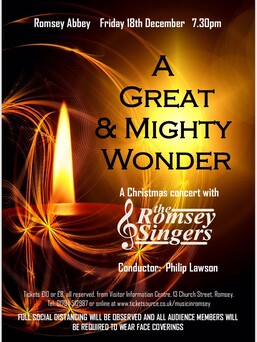 ​December - A Great & Mighty Wonder
Our Christmas concert went ahead despite Covid-19!  It was quite the challenge, as rehearsals had to be conducted in two groups, and the rehearsals and the concert strictly adhering to socially distancing. Due to the rehearsal challenges, it was a paired down programme this year.  The choir sang a variety of carols, ​with Keith Tomkinson offering a organ interlude during each section (in-between singing with the choir!).